Thursday Races to Continue in 2016

The CSULB Shields competed in Series Two and Series Three, racing in their own three-boat class for S2 then mixing it up with the PHRF-D fleet in S3.

The opening series of the summer featured three Shields, which started with PHRF-D but were scored separately. Race #1 (June 2) went to Team Frat, followed by Team Henneberque in second and Team Mossy in third. The race was a fleet-wide throw out after Mossy retired from the series and Dennis took over skipper duties for Race #2.

Race #2 (June 9) was a light air affair and a solid start by Team Henneberque shot them to the top of the fleet and they held off Team Frat by :09 seconds for the victory.

Race #3 (June 16) saw Team Denito blow out their jib in the heavy breeze moments after the start and bow out of the race. Team Frat went wire to wire for the Shields win over Team Henneberque, who were scored DNF after rounding the wrong windward mark.

Prior to Race #4 (June 23), Shields #10 (Dark Horse) was removed from service after a serious problem with her standing rigging was discovered. Having been mathematically eliminated from contention, Team Denito sat out the race leaving a winner-take-all final between Team Henneberque and Team Frat. The series victory went to Team Frat after a 4:08 win in Race #4. 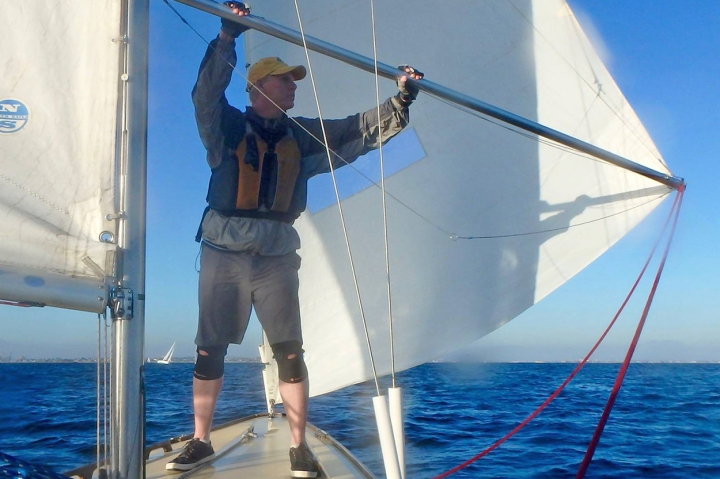 The damage to Shields #10 (Dark Horse) left only two CSULB boats able to compete in Series Three. Now being scored against the PHRF-D fleet, but without any spinnakers flying, the Shields were unable to finish better than third place in any race.

Race #1 (June 30) went to the Chaser 29 “Cardinal Sin,” with Team Frat finishing in 4th place overall — one spot and :31 seconds ahead of Team Henneberque in 5th.

Catalina 30 “Dawn Patrol” came back in Race #2 (July 7) to finish ahead of “Cardinal Sin,” with Team Frat able to vault ahead of the Catalina 25 “Whoosh” for 3rd place overall. Team Henneberque finished 8:27 behind for 5th place.

In Race #3 (July 14) it was “Dawn Patrol” in the top spot once more, with Team Frat in 3rd place again. Team Henneberque finished 3:20 behind the other Shields, in 4th place, ahead of “Whoosh.”

Unfortunately, damage to Shields #134’s (Karen) traveler car after Race #3 forced the teams to sit out the final race of Series Three. Team Frat finished the series in a tie for 3rd place but was beat out by “Whoosh” after the tiebreaker. Team Henneberque ended the series in 5th place.