Denito Wins Pop Tops by Less than a Boat Length

1…..2…..3.  That was the difference between winning and losing on June 25th at the final race of Seal Beach Yacht Club’s “Pop Tops” Series 2. Team Denito and skipper Dennis Trombley edged out skipper Mike Fratantoro’s Strong Beach Sailing squad by about two-thirds of a boat length for a win in the series’ 4th race, a win that vaulted Denito into first place in the final Shields Class standings.

With Team Strong Beach holding onto a two-point lead after the first three weeks of racing, Trombley and crew (Robert Munroe, John Majkut and Gwynn Markle) had to win Race 4 on June 25th to force a tie in the standings. In classic Denito style, the team came from behind for the victory. After a one race throw-out, the series went down to a tiebreak, which Denito took for winning the final race.

Pop Tops Series 2 kicked off on Thursday, June 4. Before the first race, skippers drew for boats and sails, with the agreement that they would keep the same sail numbers for the entire series, but draw for different boats each week. Dennis Trombley drew sail #196 and would sail Isabelle for week one. Meanwhile, Tatiana Misares drew sail #45 and would sail Karen, while Mike Fratantoro ended up with sail #35 and would sail Dark Horse for week one.

June 4th was some of the lightest air the club has ever raced in, with winds barely topping 5 mph. The Shields class would start sixth overall, with their starting gun at 6:25pm. The committee boat signaled for course #8 (upwind to Mark 37 and downwind to finish).

Team TM (skippers Mossy Kennedy and Tatiana Misares, with Kyle Henneberque and Mike Burke) took the early lead after a great port tack start at the pin end of the line, opening up an 8-10 boat lead in the first 10 minutes of the race. Team Denito (Trombley, Markle, Majkut and Munroe) and Team Strong Beach (Mike F, Paul Sorenson, Estela Tejidor and Michelle Moss) quickly tacked over to port to follow.

Denito outran Strong Beach and closed in on Team TM, who sailed well off the wind for more speed. But TM gave up the lead and Denito was first to the windward mark, followed closely by Strong Beach. A clean spinnaker launch opened Denito’s lead as Strong Beach fouled their halyard and had to drop and re-raise. The miscue allowed Denito to pull away and finish about 3.5 minutes in front of Strong Beach and seven minutes ahead of Team TM.

The teams kept their sails and drew for new boats in Race 2, with Denito sailing Karen, Team TM sailing Dark Horse, and Strong Beach sailing Isabelle. Once again the committee boat signaled for course #8 (S-37-F), but this time it was Team Strong Beach (Mike F, Estela, Michelle and Stephen Le Duc) who nailed the start on the committee boat side. They took starboard tack all the way up to the breakwater, then took port tack all the way up the wall and arrived 7-8 boat lengths ahead at the windward mark.

Team TM (skipper Tatiana Misares, Kyle Henneberque, Mike Burke and Pablo Martinez) rounded the mark in second, followed by Team Denito (Trombley, Majkut, Munroe and Tayfun Hekimoglu) in third. No spinnakers this race meant the teams went wing-on-wing for the downwind run, but as Team TM closed in, Strong Beach rigged their spinnaker pole to their jib and powered up enough to hold off a late charge from Team TM, who finished in second. 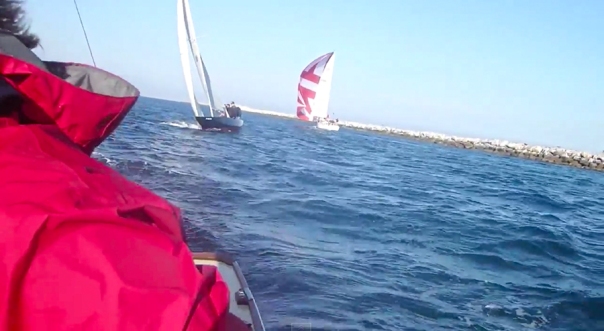 Race 3 would be another #8 course, with Team Strong Beach (Mike F, Paul, Estela and Mike Burke) taking a page out of the Congressional Cup match racing playbook and luffing both Denito (Trombley, Markle, Munroe and Majkut) and Team TM (Mossy, Tatiana, Kyle and Tayfun) before the start.

TM was forced away on port tack as Strong Beach and Denito both tried to take starboard tack all the way to the breakwater. While Strong Beach ducked the LB bait barge, Denito was forced to tack away, and soon had to tack a second time to avoid a container ship anchored in the harbor. The extra tacks allowed Strong Beach to cross Denito at the wall, and they covered them the rest of the way up to mark 37 and stayed clear ahead on the downwind run for the 22-second win.

While week one was the lightest Long Beach breeze the club has ever raced in, week four was likely the biggest. Sustained winds of 16-18 with gusts above 20 forced the fleet to sail with reefed mains, and still the boats were heeling in the puffs.

Regardless of the high winds, the committee boat signaled course #21 (S-36-F), which took the boats all the way up near Queen’s Gate and back to the Alamitos Bay Channel for the finish. With the pin end clearly favored at the start, Team TM on Dark Horse (Mossy, Tatiana, Kyle and Tim Gallagher) got a windward edge over Team Strong Beach on Isabelle (Mike F, Paul, Estela and Burke) and forced them to tack away first. Denito on Karen (Trombley, Markle, Munroe and Majkut) and Team TM both went out on starboard tack, headed toward the LB breakwater.

Port tack turned out to be favored though, and Strong Beach regained the lead at the first cross with Denito near Mark 37. The two teams match raced the rest of the way up the course, but each time Strong Beach pulled away Denito reeled them in. Meanwhile, Team TM chose to go head-to-wind during the upwind beat to shake out their main sail reef, and their deficit went from 10 boats to 20.

At the windward mark, Strong Beach rounded ahead of Denito by 4-5 boat lengths, but neglected to shake out their reef. Denito, who shook it immediately after rounding the mark, capitalized on the miscue and quickly caught up as Strong Beach followed suit. The next 20 minutes was a game of cat and mouse, as Denito covered Strong Beach’s wind, but was unable to slingshot past them to leeward.

Nearing the channel entrance, Team Denito got just enough speed to overlap Strong Beach and was able to get inside room at the jibe mark, A. Denito clung to the center line and the lead down the channel, and took the horn for a three-second win and the series victory.

The fleet will also enter ABYC’s upcoming 4th of July Regatta on Saturday July 11th and Sunday the 12th.
…