Clean Sweep for Team SCR in Opening Race of Fall 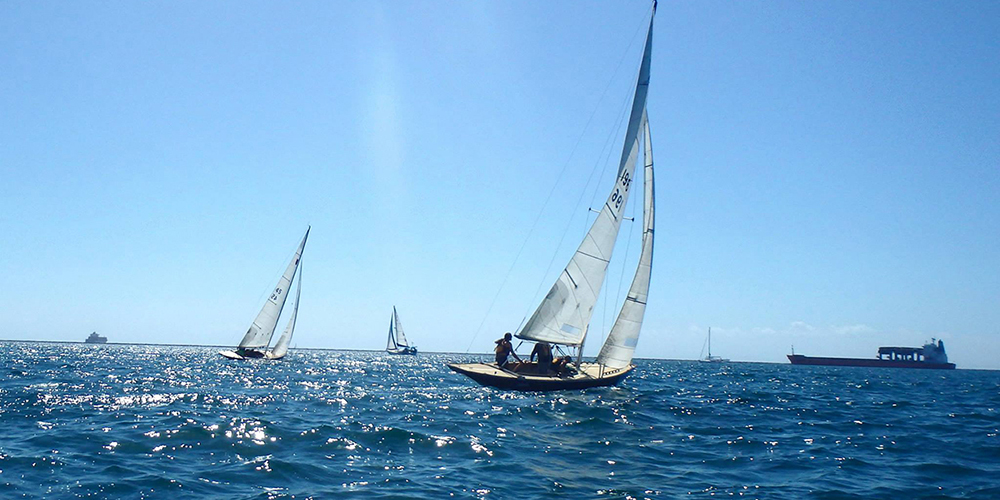 It was three races and three wins for Sopwith Camel Racing (SCR) on September 28th as Shields Fleet 20 kicked off its fall racing schedule.

The Fleet’s three active Shields were on the water, and variable winds (8-15 mph) from the South-Southwest made tactical decisions all the more important throughout the day. The windward-leeward course was set West of Island Chaffee, using spar buoy (31) by the Long beach harbor breakwater as the upwind mark.

Strong starts in all three races weren’t enough from Sail Team ‘Murrica and Team Gwynn Is F’Real (TGIF) to hold off SCR on the downwind legs.

‘Murrica was the first to reach the upwind mark in Race 1, but when they arrived they were surprised to find out that the yellow spar buoy (#31) was missing — most likely due to damage sustained from Hurricane Marie, whose storm surge punched 3-4 holes in the breakwater that have yet to be repaired.

Instead the boats rounded the Long Beach bait barge and headed back to the finish line. SCR took advantage of the missing mark, sliding in front of ‘Murrica at the barge and opening their lead on the downwind run all the way to the win.

Race 2 upped the stakes by adding a second lap. ‘Murrica was again the first to the windward mark but SCR caught up on the first downwind leg. Side-by-side at the leeward gate, the boats split the course. ‘Murrica took the West side, but SCR’s decision to go for the East side proved to be the difference. They opened up a 6-boat lead at the second windward mark and stretched it to a 35-second gap at the finish.

The boats went at it again for two laps in Race 3, and SCR capitalized on a microscopic lead to close the door on ‘Murrica at Mark 1. They opened their lead on the first downwind leg and went on to their third win.

Notably, Denito Syndicate Racing (DSR) and captain Dennis Trombley were unavailable to race on 9/28. DSR lieutenant Dr. Gwynn Markle stepped in but was unable to rally his rookie crew on TGIF to a victory.